May 12, 2020
I received a review copy of Ladies of Magna Carta, however, all opinions are my own. Thank you to Pen and Sword publishing. This post contains affiliate links, which means that if you decide to click on a link and make a purchase, I may receive a small commission that goes back into helping me keep the blog running. Thank you. In most books that deal with political or constitutional subjects like the reign of King John or Magna Carta, the facts often deal mostly with men. Women are referred to only in passing, or because of who they were linked to in birth or marriage.

But what effect did Magna Carta have on the women who lived and worked in John's reign? And could any of them had an impact on the way Magna Carta was formed in the first place?

A new book released at the end of this month, Ladies of Magna Carta, attempts to answer this question.

Women's medieval history has a special significance for me. It was the subject of my university dissertation and I managed to debunk a lot of ideas about the roles of women in Medieval Yorkshire. I couldn't wait to get started on this book.

Within its pages, I was introduced to some formidable women from the twelfth and early thirteenth centuries. Matilda de Braose, who stood up to King John and ended up being imprisoned and left to starve to death as a result. Her tragic experience - and John's hounding of her husband William - may have influenced clause 39 of Magna Carta, which stated that 'no man shall be taken, imprisoned, outlawed, banished or in any way destroyed, nor will we proceed or prosecute him, except by the judgement of his peers or by the law of the land.' This effectively meant that kings were no longer allowed to enforce harsh punishments onto people simply because they had offended them.

But it wasn't only in the formation of the Magna Carta that women made their mark. We're told about various women who used the newly implemented clauses to enforce rights to property and land. Unfortunately for others, such as the Scottish princesses Isabella and Margaret and also Eleanor of Brittany, it is their legacy that highlights John's failure to implement what he agreed in Magna Carta, or perhaps that Magna Carta wasn't airtight enough to protect everyone in the kingdom.

Other women discussed include Nicholaa de la Haye, who the author describes as 'an integral and essential part of the story of its creation.' Nicholaa was made Sheriff of Lincoln in her own right and defended Lincoln castle from not one but three sieges, the final one against the French in 1217.

The women dealt with here are the noblewomen and princesses of the realm, but that is realistic: the average common woman wouldn't be too affected by a document drawn up about inheritances and the transfer of lands. And there are many more women than those mentioned here, that are discussed as having influenced or been influenced by Magna Carta somehow. For anyone interested in women's history, it makes for enlightening and fascinating reading.

The book is organised by mini-biographies of each woman, dealing with their relationship to Magna Carta, one by one. They are arranged by family group, so we can achieve perspective on what was going on at the time, within the families. This could be considered a little repetitive, as the stories cross over often in subsequent chapters, as families marry into one another or become otherwise connected. However, I actually found this really useful as you can recognise the same events that happened in another family but from another woman's point of view.

The author also gives some backstory, which I was also grateful for, to help put Magna Carta into context. We start with events from Henry II's reign and John's relationship with his brother, Richard I. Be prepared for some names - fashionable at the time - to be repeated quite often. The story of women in Magna Carta has quite a few Eleanors, Matildas and Joans, but the author has made a real effort to help us understand each one, giving their full titles and surnames where necessary so we can tell them all apart. The book is well-researched, referenced and contains a copy of the Magna Carta at the back so you can delve into the details for yourself.

Having read the book, I feel that I have developed a deeper understanding of the struggles of women who lived and shaped Magna Carta in their own way. Their attempts to assert their rights to inheritances, lands and rights and their daily duties - some being left to manage (and defend) castles and family estates in their own right. The terms of Magna Carta applied as equally to them as it did to the men of the realm.

If you're interested in Medieval history, particularly the history of the roles of women, this book will give you a greater understanding not only some of the strong, independent women who lived under John and the early years of Henry III, but how the Magna Carta changed many of their lives. And, as in the case of tragic Matilda de Braose, how some of them may have  even altered the course of history.

You can find Ladies of Magna Carta over at Amazon here, or in bookshops.

Have you read the book? What did you think? Let me know your thoughts in the comments below...

You might also enjoy...
9 Times The Empress Matilda Was a Total Badass
The Rebel Nuns of Medieval Yorkshire
Did Elizabeth I Pull Off The Greatest PR Stunt of All Time?


Written in 1467-68, which places it in the middle of the reign of King Edward IV, the book contains recipes for meats and fish, sauces and sweets. When reading it, if the language written seems a bit unfamiliar, it can help to read it out loud. Medieval people would have spoken very differently to us, but they wrote down how they spoke. You can really get an idea of the accents of the time in contemporary documents. 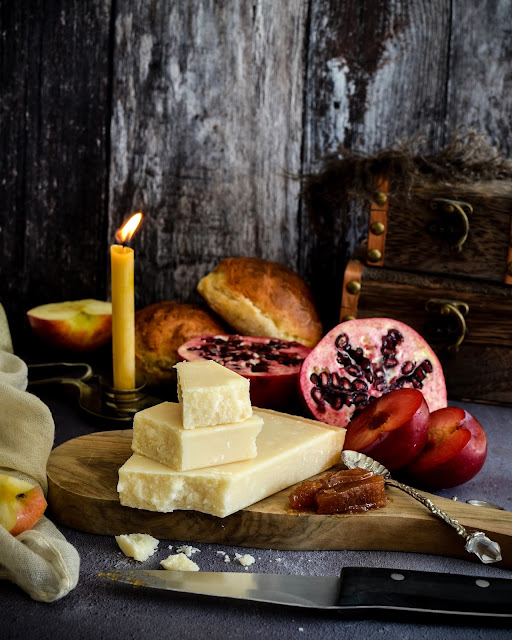 Back in 1524, when alliances between great nations were forged with Parmesan Cheese.


We also know that Henry enjoyed mermelada - Portguese quince paste gifted to him by a Mr Hull of Exeter in 1524.
Nowadays, this sweet, fruity paste is often eaten with cheese. We have no evidence that Henry ate the two together, but they do taste pretty incredible together so my guess is that he would have paired them at some point, in one midnight feast or another.
And so it is that the image of Henry VIII, retiring to his private apartments, kicking off his velvet slippers and calling for a l…